This ‘Star Wars’ Exhibit is Every Fanboy’s Dream Come True

When you think about it, costumes are as internal to the story of a movie as the plot. A good costume makes a movie look good, but great costumes immerse you within the world of the movie. Star Wars is one such movie that has made loyal fans for decades wish they were part of the galactic universe. Indeed, costumes from Star Wars have always had a special place in the hearts of fans who anxiously wait for Halloween to dress up as their favourite Jedi, Stormtrooper or the ultimate villain -Darth Vader.

Consequently, it’s a treat for die-hard Star Wars fans when they found out that there is an exhibit where around 70 costumes from the cult sci-fi franchise are on display, including the fussy protocol droid, C-3PO. There is a reason why the droid is so rigid in his motions, and you get to see that when you get up close to the costume.

“I really have to just accept that I’m locked in there,” Anthony Daniels, the British actor who’s played C-3PO for nearly 40 years, tells The Post. “I can’t get out. I have three handlers who help me.”

Once you enter the exhibit, you will find yourself facing Obi-Wan Kenobi and Queen Amidala – well, mannequins dressed in outfits once worn by famous characters from the Star Wars universe. 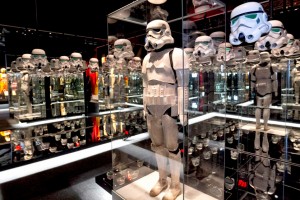 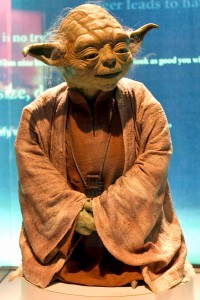 Yoda and his many words of wisdom

These costumes have been displayed for the first time ever, and they have been pulled from the California-based Lucas film warehouse where creator George Lucas stored everything from the two trilogies including costumes from the upcoming ‘Star Wars: The Force Awakens’ movie, no doubt predicting that fanboys would one day pay $20 to have their fantasy come true. The costumes are displayed at the “Rebel, Jedi, Princess, Queen: Star Wars and the Power of Costume: The Exhibition” at Discovery Times Square, 226 W. 44th St., Manhattan, Discovery Times Square.