When Beijing and Shanghai respectively ranked 2nd and 3rd on the WHO’s list of the ‘World’s Most Polluted Cities’, the problem became quite clear to everyone. As a result, everyone responded to the problem in their own ways. The government held meetings and took measures to curb the problem, the people became more aware and careful, and the fashion designers introduced a range of stylish anti-pollution face masks in the China Fashion Week!

The QIAODAN Yin Peng Sports Wear Collection showcased designer respiratory face masks that are definitely going to be a part of ‘smog couture’. The fashion show, held in Beijing, saw models strutting to Yin Peng’s collection, and the audience saw a display of determination to deal with the problem in their own way! From full-face cover, like a fencing mask, to angular lightweight mouth-covering designs that compliment running gear, the masks were a total hoot. From pop colours to pure blacks, the face masks stole the show because of the designs, the appearance and the thought behind. Seeing the response from the audience across the world, Yin Peng said that he was surprised his collection had attracted so much attention, and he also admitted that the smoggy environment was not his main inspiration. In an interview with CNN, he said, “From my perspective, no matter how good the outside environment is, the key is how we mix the situation outside with our hearts.” This, truly, reflects in his collection.

The Paris Fashion Week in October saw a similar display when designer Masha Ma presented face masks that were decorated with beautiful studs and sequins. Ma, and many other Chinese designers like SANKUANZ, Qiu Hao and Xander Zhou, also decided to collaborate with an e-commerce site YOOX to put forward a series of couture masks as part of their eco-friendly initiative, YOOXYGEN. If you are going to fight the problem, at least do it in style!

Check out more photographs below: 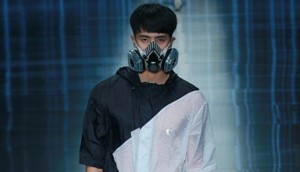 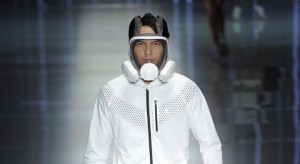